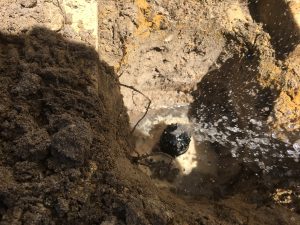 Client called me saying they had a burst pipe under the swimming pool paving. After digging it out looking for a burst pipe to my amazment I found the landscaper had just paved directly on top of a popup sprinkler. The owner informed me that the paving had been down for at least 15 years.

wow why has it not leaked for 15 years